- May 26, 2010
Stoli's new marketing campaign is tied to another icon in the Bad Decisions industry, that's right, Playboy. They're rolling out a year's worth of promotions with Playboy with everything from changing their logo on one of their flavors to the Playboy Bunny logo to these commercials with Hef himself. It's a great concept. Would you have a drink with you? Check it out.
Post a Comment
Read more

I've been a pretty big fan of the Absolut city series since the first one out of New Orleans.  Now, Absolut has teamed with Spike Lee to bring you Absolut Brooklyn.  Let's hope they do Brooklyn better than Domino's did. They've gone all out on gimmick for this whole series but most of the flavors have done a pretty good job of backing it up.  For Brooklyn they even changed the usual seal on the bottle and added some spikes to it.  Now that's fancy! Spike Lee did the design on the bottle and tried to match the feel of the red apple and ginger flavor inside.  On the heals of the launch, Absolut is donating US$50,000 to Habitat for Humanity in NYC. Look for it starting in June. Absolut Brooklyn
Post a Comment
Read more 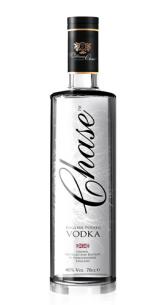 Chase Vodka won the best of the best at the 2010 SF World Spirits Competition and it's rather surprising.  Now, this isn't the kind of vodka you want to drink through your eye , it's the good stuff.  It's special because it's not from Poland, Russia, or the US and it's not a grain vodka.  It's made from taters and comes from Jolly Olde England. The vodka isn't made by one of the big guys but from a guy who was a big guy in the snack food industry.  William Chase was the founder of Tyrrell's, a company that makes potato chips (they call them "crisps!") and he chucked it all in 2008 to go and make vodka.  Apparently, he's one of those "over-achievers" we hear so much about.  He says he didn't do it with gimmicks (like a fire extuingisher for a bottle , which is freakin' cool!!) or with tons of marketing.  He just became the brand and pushed his stuff until he got it to 1,000 bottles a week.  Next year, Chase plans to
Post a Comment
Read more

8 Tips to increase your cocktail IQ.

- May 16, 2010
Tony Abou-Ganim has done more to advance the art of cocktails than Tonya Harding did for sex tapes.  Vanity Fair is covering the wildly popular Manhattan Cocktail Classic and one of the writers went and hung out with Tony and got some great tips from him about making drinks as well as going out drinking. My favorite tip?  Ask for a Negroni.  If they don't know how to make it or tell you that Negroni isn't working tonight, then get a beer.  Now, not everyone likes Negroni's so maybe think of a cocktail you love and know how it's supposed to taste.  No, not Sex on the Beach.  Maybe an Aviation or a Sazerac, something with some culture. Tony's obviously biased when it comes to East Coast vs. West Coast and, though he's done work in Las Vegas, hasn't spent enough time in our West Coast cities to make a valid argument.  If you think it's San Francisco vs. New York, then you're not even close.  Check out his other tips on Vanity Fair's site. Ei
1 comment
Read more

More Absolut What The Hell

- January 25, 2010
You probably remember when Tim & Eric & Zach all made the commercial(s) for Absolut a couple of years ago. Absolut had one rule: Do whatever you want, but the product has to be in there somewhere. Jump forward to 2010 (or whatever year it is right now, I've kind of stopped thinking about it) and they did the same thing for Spike Jonze. Jonze's take is a robot love story (You know, like in The Notebook) called "I'm Here." The series of shorts aren't out yet but here's the gorgeous and intriguing looking trailer.   Absolut
Post a Comment
Read more

- December 21, 2009
Looking for a liquor cabinet that plays songs depending on which bottle you take out? How about one that may kick off a seizure for all unmedicated epileptics? The Swig and Jig may be for you! Check it out below: Swig & Jig from Gizmodo on Vimeo .
Post a Comment
Read more
More posts