Craig is not a Bond, they just used the name to make action movies about a spy, not Bond movies.

New Absinthe's on the market 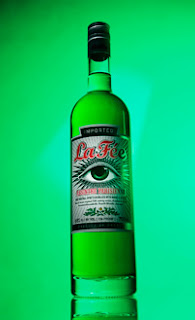 Only 8 months after real absinthe has become legalized in the U.S., the importers and overseas producers have really started taking advantage of the buzz and mystique that absinthe holds and launching like crazy here. With more absinthe launches than vodka lately, it may not be long until the brands are just as gimmicky. Three new absinthe's have launched this week in hopes of garnering early market share in a soon-to-be-crowded market. La Fee Absinthe Parisienne is made in Paris and has been around for a while as it's been sold in 20 countries for the last 10 years or so. The product is made by traditional standards and the owner of the recipe still approves each batch of La Fee. For a while, Lucid Absinthe was the only one you could get in the US as it wasn't made from the traditional Grand Wormwood (until March of 2007) so it could get away with going around the law. The producers guessed that the stuff that was considered a fake (but still very flavorful) wasn'
Read more

About two years ago, Morton's commissioned the world's largest bottle of wine to be made to celebrate their 25th anniversary. The result was "Maximus." Maximus was 34 gallons of Beringer Cabernet Savignon love, stood 4.5 feet tall, weighed 340 pounds and ended up auctioning off at Sotheby's for the simple price of US$55,812. The Aussie's have now taken it to the next level. They have created a 64 gallon, 6 foot 5 inch bottle that carries the equivelent of 387 regular sized bottles of Shiraz. The "Five Virtues" vintage was created specifically for this bottle and is made from the efforts of 5 winemakers. The Guiness Book of World records has declared it the largest bottle ever made and the owner has claimed to already have turned down offers of US$100,000 for it. Apparently, there's quite a bit of the stuff as 12,000 regular bottles of the vintage were made to sell alongside the promotional giant. World's Largest Bottle Of Wine Makes It&#
Read more