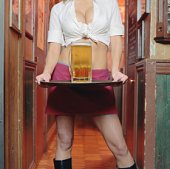 According to beer companies, beer's not doing so well. Though we think it's not because people are buying less beer, their just spreading around their dollars between beer companies. Rather than buy an MGD or Budweiser, they're buying a local microbew.

But people who know these things say we're wrong and have written an article all about it. It includes a campaign to bring beer back in to the limelight and convince us that it has every bit as much of a place in a romantic setting as wine does.

We don't expect we'll ever be able to pass off a good beer on tap in place of a bottle of Duckhorn on a first date, but it certainly sounds like a nice idea.

What, no beer runs and bikini models? [CNN/Money]