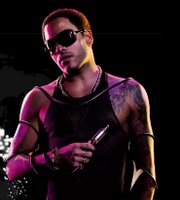 Absolut vodka has launched Absolut Kravitz. Lenny has switched from having us rock out to putting his smooth voice to groovy dance tracks and he's created a cross-promotion with Absolut for a free download of one of the first songs on his new album.

Breathe is the name of the track and we've been playing it over and over here in the office. Definitely a nice transition by Mr. Kravitz. Yes, we'll go his way.

The song is downloadable in MP3 format, so no crappy DRM shenanigans. That's right, we said it. Shenanigans.