Only Hot Girls Can Park My Car 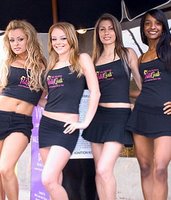 I've gone to bars in LA and dropped off my car (A '72 Pinto with bald tires and one brown door) with valets many time. Not so long ago I handed the keys to the vehicle I lovingly call "The Sugarland Express" over to a complete hottie. I was immediately concerned because I thought some random girl thought she was hot enough to just walk up and take my car on a joyride through the streets of LA.

They're opening up a new franchise for San Diego and I expect the idea has good promise in a lot of cities. Well, depending on how cold a city gets...