Rosie, Get Me A Beer 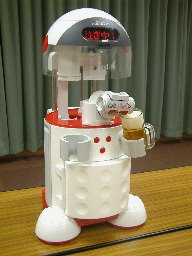 Is there any greater use of technology than this? Fighting cancer is so time-consuming. Ending hunger is just unrealistic. Serve man a beer? That's not only possible, but necessary.

Asahi is giving away 5,000 of their robot bartenders as a promotion with a bunch of beer to boot. The ro-bot's body is a refrigerator that can hold a six-pack. Pop the beer in the little holder and it picks up the beer, cracks it open, tilts the glass, and pours the beer with a perfect head every time.

Unless your IP ends in a .jp, you won't be getting this one, though. I'm sure they'll be up on eBay for way too much soon.