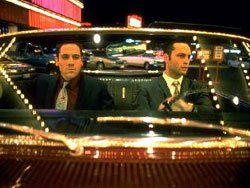 The movie that started it all...well...brought it all back is...um...bringing it all back.

The 10th Anniversary of "Swingers" is here and they're celebrating it at the U.S. Comedy Arts Festival. Jon Favreau, Vince Vaughn, and Ron Livingston are all set to appear to commemorate the film that brought hip back to the American conciousness.

It was after this film that I started ordering martini's at bars as well as getting a taste of Glenlivet, or Glenfidich, or any of the Glen's.