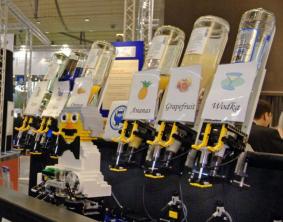 Unfortunately, this bartender won't be around long because it will be insane due to the conflict it will have with the 1st Law of Robotics. (Not a nerd? Look it up).

This charming device uses voice recognition to access it's large library of drinks and then mix one up for you. Do you like a drink that it doesn't know? Just tell it what the ingredients are and it'll mix it up for you.

While it's patiently making your drink it pulls from a big list of jokes in its database and regales you with its wit and humor.

"Hey! Remember that joke that the robot bartender told us? Soooooo funny!"

At least if the joke sucks I can take a swing at him and not feel bad.