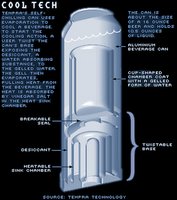 The Blogosphere is on fire! The latest in beverage cooling technology is making the rounds on news that there's a can out there that can instantly cool a drink by up to 30 degress just by being activated.

I think it runs on a combination of circulation, ventilation, and imagination. I say "imagination" because I haven't seen one actually working yet and it will be vaporware until something I'm holding in my hand is being cooled by up to 30 degrees.

Everyone seems to be talking about it's huge beer applications but I don't get why everyone is so focused on drinking beer from a can. Even if I were to drink a beer from a can, it's because it's cheap and I needed a case and only had $10. The self-cooling can would have to raise the price significantly to completely negate this value.

I'm looking forward to the huge amount of applications that can come from this. Maybe it will bring peace in the Middle East because all they really needed was a cold beer.

Self Cooling Beer Can - [Tempratech.com]
via Digg