Some thanks and virtual bartender 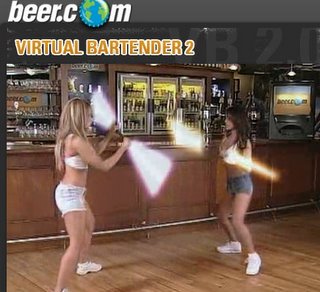 As of last week we averaged over 1,000 users per day. That's pretty damned cool. I'm surprised to see it myself considering how poor we rank on Technorati, but Performancing.com doesn't lie!

In case you live under a rock, the Virtual Bartender are girls that do as you command, just like any good bartender does. They each have a huge list of commands and the most recent version has two girls. The shot pictured is them doing Star Wars. But they make out, shake ass, and many other things (no nudity, but plenty of cheesecake).

They seem to do a lot of stuff except being able to make a martini. Brilliant.

Anonymous said…
I'm surprised you didn't link to any of the command lists online. They do a heck of a lot of stuff.

I've wasted a good amount of time on beer.com goofing around with the virtual bartenders. It's a fun site.
5:16 PM

Unknown said…
It was more fun to find them. You get much more pleasure when you find one. I accidentally found Star Wars.
5:19 PM

Thanks for the mention of VB!