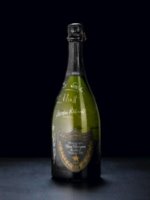 England's World Cup winning soccer (football) team from 1966 signed a bottle of 1966 Dom Perignon, thus insuring a future bottle of champagned that will be auctioned for a completely unreasonable amount.

Sotheby's is about to auction off the bottle in honor of Bobby Moore, the 1966 Captain of the Team who died of Bowel Cancer. Proceeds will go to the charity that his wife started and help them towards their goal of raising £3 Million this year. 80% of all bowel cancer is curable if caught early enough. The bottle should go for about US$8,700 to US$13,000, but could go a lot higher for a die hard football fan.

But seriously. Ouch. I'm donating just on the pain factor.

Vintage 1966: champagne to be auctioned in memory of Moore - [Independent]