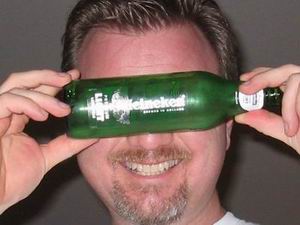 I received a package yesterday from some friendly anonymous person who was kind enough to include Heineken's new Light Lager inside of an awesome carrying case. The carrying case is a hard shell that can be used to safely transport wine, scotch, or any other type of liquid. It's gorgeous. I quickly threw it out and chilled the beer in order to taste it.

My first taste made me think of Corona. Hey, that's pretty good for a guy who's not that in to Heineken. It was a very light taste that is sure to be refreshing on hot summer nights. I saw that one of the test markets for the beer was Miami, smart move as this is the kind of beer I'd want to use to be refreshed on a night out clubbing.

The drawback came as I continued through the beer. It began to lose it's taste. No, it didn't taste bad, it just had *no* taste. As a matter of fact, it almost seemed as it was pulling taste from my mouth. It was the anti-taste.

Bottom line: This stuff is low calorie and does just as well as any other low calorie beer and is a lot more refreshing than some of the other ones. If that's what you're looking for, this is the beer.