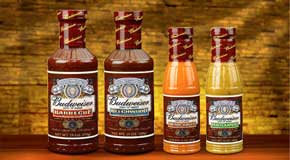 Well, we've heard the beer business has been getting pretty bad for the major manufacturers. Revenue is down and all kinds of new campaigns are being launched to bring people back to beer.

Looks like Budweiser is hedging their bets by breaking in to some new markets. Most recently, BBQ Sauce.

Betting on the fact that nothing goes better than beer and BBQ (and babes), they brewed up their own recipe for a sauce to be made by Vita foods. They came up with a baste, two bbq sauces, and a wing sauce.

Should be available in the next few weeks.

King of Beers now wants to reign over the barbecue - [STLtoday]