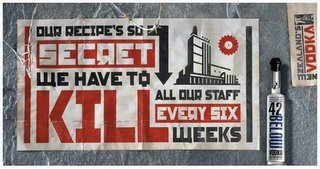 42 Below is sponsoring a Cocktails World Cup. Forty-two bartenders representing 18 countries descend on New Zealand’s adventure capital on September 10 for a week of merry mixology mayhem. There they perform on an ice bar mixing up a storm using their leading edge cocktail concoctions.

The seven-day event also sees bartenders making cocktails whilst bungy jumping, dangling out of a helicopter and shooting down the Shotover River in a jet boat. And for the first time, the grand finale at Earnslaw Park on September 16 is open to the public.

If you think you can be on of the 42 that are flown down to New Zealand for the contest, then you can enter at the link below.

Contest! Got a great vodka recipe that you want to share? E-mail it to me at abeautifulmartini@gmail.com and I'll send you a 42 Below shirt. I'll give out the shirts for as long as I have them. They sent me a bunch of them, but most of them are girls shirts, so girls may have an advantage in this contest. The only rule is that the recipe has to be original or obscure. If you send me "Vodka with a cucumber in it" then you're screwed.