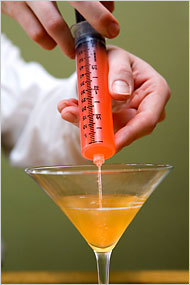 David Burke's Primehouse is just the latest in upscale restaurants that are spending a lot more time taking their cocktails seriously and getting it down to a science.

It has become easier and easier for restaurants to have exceptional wine lists, especially steak houses who aren't varying their menu's so much as to be constantly concerned about pairings. So differentiating themselves just based on that isn't working out as well as it used to.

So, more and more restuarants are finding cool new ways to do cocktails, which are another nice little profit margin for any restaurant.

How about a martini with an olive flavored lollipop? Or bitters that are infused with maraschino cherries?

Resaurants are hiring directors of cocktail development in order to be on the cutting edge of mixology technology.