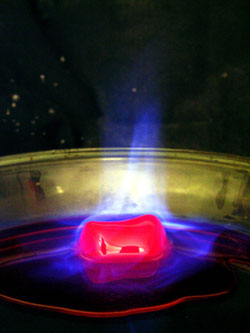 Let's be honest: Jell-O shots were invented so that guys could get more girls drunk. At no point in the history of drinking were there a few guys sitting around, slapping each other on the back, fixing the engine on a stripper's car, and one of them suddenly goes "Hey! Let's totally put some alcohol in Jell-O and then drink it!" After which they squealed with delight then gave big hugs all around.

So, what did we do to regain our masculinity after perverting Bill Cosby's source of advertising fame in to something that would get girls in to a drunken stupor? Well, now that I put it that way, maybe that was all we needed to do.

But we also set the fucker on fire.

"How do I do that?" you might say. Well, My Science Project has got you covered. From making the shots to turning them in to an edible Sterno, it's all right there. Check it out.

Anonymous said…
Now, that looks like fun. I'm totally doing this for my next party.
4:11 PM