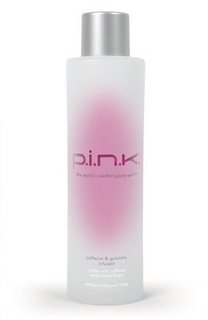 The press release for p.i.n.k. says that it was released "filling a void in the spirits category." With the huge amount of vodka's out there, from hemp to jewels, I can't think of any real "voids" in the market. At most, it saves "a step."

This new vodka has caffeinne and guarana (flawlessly) infused in to the formula in order to get around the pesky Red Bull mixture that is often used when you're out late at night and need the extra kick.

One thing I will say that impresses me is that they were able to get the essence of the guarana been and the energy it provides without the color or the taste that often comes with it (that's the tartness you usually taste in most energy drinks).

The vodka is made in Holland, bottled in Florida, and inside of a French made bottle. About as cosmopolitan you can get. What is it about Florida and all the vodka's being launched from there?

Southern wine and spirits is distributing it, so that means it'll be pretty well available across the U.S. fairly soon. Expected price is $40.

In case you're wondering, the guy with the perfect abs on the intro at their website is me. I pretty much always hook up like that. Doesn't everyone?