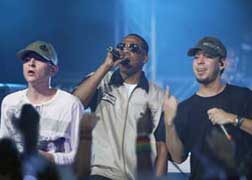 The ephemeral Jay-Z and the legendary Cristal are exchanging a war of words about the brand's association with the hip-hop lifestyle.

The head of Cristal, Frédéric Rouzaud, mentioned that Jay-Z's myriad comments and allusions to Cristal in his songs and lifestyle are "unwanted attention."

Jay-Z fired back saying that it was a racist comment and subsequently refused to promote Cristal products in any way, including at his 40/40 nightclub.

So, when is protecting the image of your brand important to the point that you'll turn down business in order to do so? Are they truly racist comments? Personally, I think playing the race card just because your feelings got hurt is pretty weak. Jay-Z is probably used to people clamoring for his attention and when someone decides they don't want it, he gets offended.

Frederic's response to all of this? Not phased in the least. He said, "I'm sure Dom Perignon or Krug would be delighted to have their business…" Cristal has been around a long time and will be around long-time after Jay-Z is in the Retirement Home for Active Rapping Seniors.

The love between hip-hop and the champagne giant has died... - [MTV.uk]