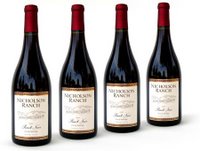 Wine.Woot has their deal up and the verdict for this week is: Get it!!!

The Nicholson Ranch Estate 2001 Pinot Noir is a great wine and normally sells for US$47.99 per bottle. In this deal you're getting 4 bottles for the single price of US$49.99. You're not going to beat that unless you find out about someone who's getting this Woot and then robbing their house of the delivered wine package while they're out buying food for the party they're going to throw because of the deal they got.

I initially rated this deal as a "Pass" because I never learned to read, so I assumed that when someone told me of a single bottle for $47 vs. Woot's $49, that was a crappy deal. I would take the time to learn to read, but living The Beautiful Life is very time consuming, thus requiring one of my many servants to handle the task. Said servant has thusly been sacked.

So again I say: Woot!