Jack Colton gets you in the clubs 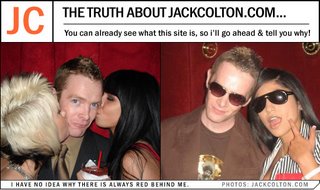 But to add even more to it, he chucked all of this riches in order to start up a site that talks about the Las Vegas nightclub scene. You'd think that with all the clubs in Vegas that this niche was already being served. You'd be so terribly wrong.

Most of the publications that cover nightlife in Vegas usually look like they just took some of the many press releases that the clubs send out and reprinted them in their magazines. There's very little actual information that helps you decide where to spend your hard-earned clubbing dollars and your extra-valuable clubbing time.

Lucky for the world, Jack Colton loves you. He takes the concept of the club, rubs them in interesting circles, and comes out on the other side with an actual opinion that can help you decide if that's where you want to go. He even publishes great little guides about things like VIP Hosts, how to get in to the VIP line, and how not to blow your whole wad on a table with a single bottle of vodka sitting at it.

Finally a site that gives you the ins and outs by someone who understood how great Utopia was and gets the gossip on all the clubs (Do YOU know which club requires two years of modelling experience to work there?). Keep up the good fight Jack.