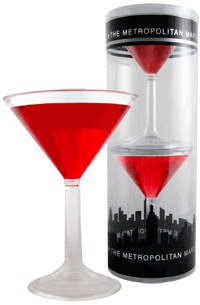 Ever grab for a beer out of an ice chest and wish it was a martini instead?

Me neither, but that's only because I didn't KNOW about Metropolitan Martini's! These babies come in packs of two, just in case of the off-chance that you might want to share a drink rather than just sit down to two martini's by yourself.

They come in flavors of vodka martini (of course), Cosmopolitan (shown), Apple Martini, and Chocolate Martini. Something for the fellas and the ladies. They sell for US$11.99-$13.00 for a pack of two. So you just throw it in the fridge, peel off the lid when you're ready, and drink away.

Peel open a cold one!