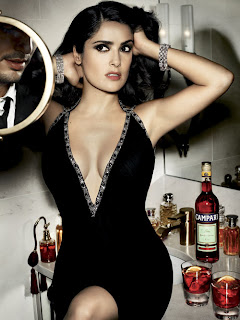 Campari is a mild bitters-type apéritif, often drunk with soda, orange juice, or in mixed drinks and it's development is a pretty big secret. It's built to make some pretty interesting drinks and has a flavor profile that keeps you guessing.

Salma Hayek is hot as Hell and from what I've been told by people who believe in Hell, that's pretty hot.

Don't expect to get your hands on one though, only 9,999 were made. They were going to make 10,000 but shipping was just too expensive.