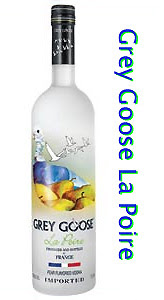 I normally don't want to cover every time a flavored vodka hits the market, there's just too many and I could pretty much use up every post doing just that.

However, Grey Goose is fairly picky about what flavors they choose to throw out there, they only have vanilla, orange, and citron as of right now. They've decided to launch a pear flavored vodka to add to their stable which is a flavor that actually sounds interesting to me, though they'll be competing directly with Absolut Pears which launched last year.
vodka