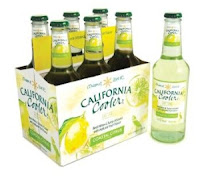 If you had to pick any one alcohol to remember the 80's by, it would definitely be wine coolers. This was pre-RTD, pre-Mike's Hard Lemonade, and way before vodka popped up from every county in every state.

The drinks were great for hot days, had more alcohol than beer, and didn't leave any girls left out of the summer BBQ's. Bartles & James were always sure to thank us for their support and that made us feel all warm and fuzzy about them.

They were basically done away with in the 90's due to changes in laws that stopped wines from going across state lines, but now Majestic Brands is bringing back one of the most popular of the wine coolers, California Coolers.

Yup, just like Tab, California Coolers are what's new again. You can get flavors like Coastal Citrus, Pomegranate Berry, Cranberry Grapefruit and White Peach for a mere $7.99 a six pack. Expect to see them in the Western US right away with a national rollout by the end of May.

And don't forget the V8's and Aspirin you'll need when you wake up the next day and realize that just having two of them gave you a massive headache.

Anita (Married... with dinner) said…
I did always wonder what happened to wine coolers, but always presumed that overexposure did them in. I should have guessed it was government meddling.
2:43 PM