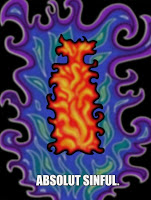 In 1981 Absolut started an ad campaign with a simple picture of their bottle of vodka with a halo over it, the caption read "Absolut Perfection." Now, over 25 years and over 1,500 Absolut Something ads later, they're killing the campaign.

One of the most recognizable print campaigns in history is getting the boot because the company feels that people can't "get involved" with the brand, rather than be shut out by a campaign style that limits the company as well as the consumer's inspiration.

The next campaign will be shots from an Absolut world. The new campaign will illustrate life in an imagined Absolut world, where men could have babies, the moon would be a disco ball and there would be no global warming. One of the first executions to be rolled out will show an image of New York's Times Square, where the advertisements have been replaced with fine art.

The new campaign will also go beyond print and become much more broad-based with print, plus television, Internet, mobile, and guerrilla advertising. Click the link below to see the first print ad from the new campaign.