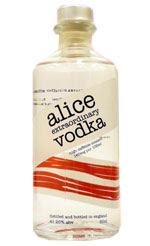 Though vodka's that contain the essentials of energy drinks are certainly nothing new at this point, this one is worth noting because of it's country of origin.

England is now the proud home of it's own energy vodka that contains guarana, creatine, d-ribose and natural caffeine and delivered at 41.25% ABV.

Alice Red has a clean taste with subtle notes of chocolate, vanilla, cream and coffee and is distilled 5 times in London from traditionally yeast fermented English grain grown in Norfolk & Suffolk. Those are places in England, they probably have soccer teams.

Two shots of the stuff contains the same amount of caffeine as your traditional energy drinks. You can go now, be the wide-awake drunk you've always wanted to be.

Shane Solanki said…
I'm having real problems tracking down Alice Vodka; I can't find any distributors/sellers, and i can't even trace the people that make it to ask them. The website link above no longer functions. Any ideas?