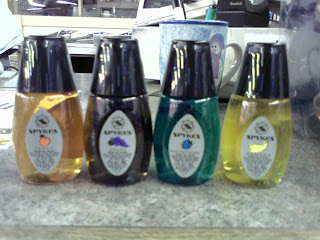 Super-secret sleuth Courtney works at a liquor store and thought of me! But instead of sending the raunchy nudie pics that she usually sends me, she sent me pics of the Spykes line-up.

Yes, I know that it looks as clear as the pictures of Sasquatch, but do YOU have pictures that you took of the Spykes line-up? I didn't think so.

Spykes - You know, for the kids
rtd