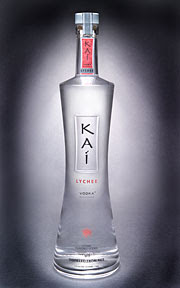 Kai vodka, made in Vietnam, is setting itself apart in two ways. The first is that it's made from rice, the second is one of the flavors they're launching is lychee infused vodka.

Kai vodka is made from Yellow Blossom Rice cultivated only in the Red River Delta of northern Vietnam. It is pot-distilled and transferred to a column-still where it is redistilled twice.

The vodka is being launched via Hawaii and University of Hawaii MBA students as part of the team to design the bottle. The name kai can mean sea, in Hawaiian. It means pleasure in Japan and happy gathering in China. Interestingly enough, it means nothing in Vietnamese.

A 750ml bottle will sell for under US$30 even though they're designating the vodka as "ultra-premium." It will launch in Hawaii on June 2.

Anonymous said…
I tried Kai Vodka this past weekend at a promotion, the Lychee was great and the Pure was extra smooth.
11:27 AM

Anonymous said…
We went to the "Big Bang KAI Vodka Launch Party" at the Pearl here in Honolulu on July 3rd and had a few "Miss Saigons". These cocktails have KAI Lychee Vodka as base and they were just out of this world. I found the recipe on the kaivodka.com website and it is my new absolute favorite cocktail!
Cheers!
5:36 PM

Anonymous said…
This summer I went out to Hawaii and tried Kai Lychee Vodka for the entire holiday I was hooked on the stuff. I loved it. Last week I found the website and I am currently working my way through the recipes.
1:26 PM

Hiếu (pronounced "Hugh") said…
Actually....the closest sounding word to Kai is "spicy" or "hot." It is associated with the action of eating food that is extremely hot.
2:00 PM