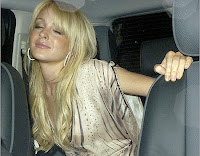 I'm pretty sure that people at Svedka Vodka are in the midst of getting fired right now.

First, they come out with one of the best ad concepts in quite some time, then execute it so poorly that I prefer to go out of my way just to avoid the ads. The next step was to decide to sponsor a 20 year old girl fresh out of rehab and provide the vodka and money for her 21st birthday party.

Lindsay then goes on a binge and gets caught while driving under the influence of *something* but no one is saying if it's the cocaine that they found in her car or alcohol.

Now, Svedka backs out because it's "irresponsible" to be involved with someone who just got a DUI. I guess no one thought that sponsoring an AA Member, fresh-out-of-rehab, cocaine snorting starlet might be a bad idea in the first place.

In a span of two weeks Svedka has been able to embarrass an entire industry and put a whole heapin' helpin' of shame upon themselves. I doubt they'll go out of business because of it but I would really prefer it if they would.