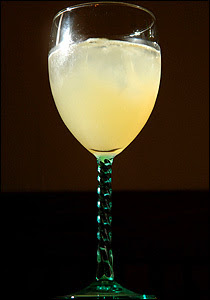 There always seem to be two factions in the drinking world, the beer drinkers are on one side and the mixed drink lovers are on another. When their worlds collide, someone will pay and the price will be justice.

Drinks like the Beerita are bringing the worlds together in a total affront to all that is holy. Instead of adding Triple Sec in to the classic margarita recipe, add some beer. It supposedly lightens up the drink and, of course, makes it bubbly. BUBBLES!

One mixed beer drink that I've had is mentioned in the article. The Chelada is a light lager with lime and salt served over ice. Miller Brewing is even trying to cash in on the drink by offering Miller Chill, a bottled version off the drink.

So, when your summer party goes horribly awry with threats of violence as mixed drinkers once again confront beer fanatics, hose them down with the sweet taste of compromise.

Bartender, we'll have a round of Beeritas
beer cocktails recipes