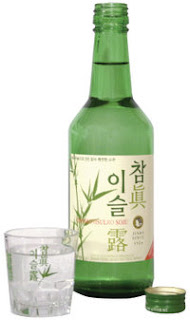 Though North Korea still falls under the "Trading with the Enemy" act, recent discussions have put that one up for grabs in an effort to bring North Korea in to the world market in exchange for them not nuking anyone.

Pyongyang Soju shipped last month from North Korea and is expecting to be on sale soon in specialty shops in New York and a few other major cities.

No word yet on if this will actually happen or if the stuff is just going to get stuck on the docks while political battle ensues.

Anonymous said…
Not sure if I should mention this, being as how it's apparently not legal, but I've had said soju before, courtesy of my sister's boyfriend and his frequent trips to LA's Koreatown.