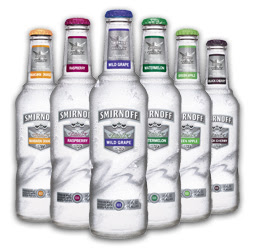 Smirnoff Ice launched their new pomegranate flavored version of Ice a few weeks ago and I'm a huge pomegranate fan.

Smirnoff must have known of my love for the stuff as they sent me some for review. Well, not some. A whole case. This gives me a chance to get really in-depth about my review.

The bottle looks like the other bottles in the line but has the dark red label that you'd expect from pomegranate.

Right now, they have some contest running where they have a winner every 60 seconds if you pull the cap off and win something. I didn't win anything, but I have a whole case to keep trying. I'm in California and can't win anyway, oh well.

Most of the malt beverages in this space get too sweet when they add flavors. The pomegranate in this one is very light, stronger in an aftertaste than it is when you initially drink it and doesn't come across as extremely fruity. It's easily one of the better flavored drinks I've had and far and away the best of the Smirnoff Ice line.

With summer approaching, this is definitely going to be the drink that you'll want in the ice tub alongside your beers and this one isn't just for the girls, it's perfect for a refreshment.

Did I mention I got a whole case?

Dr. Bamboo said…
I'll definitley give this a shot. I had one of their flavors (Can't recall which one) a few years back, and wasn't terribly crazy about it...but this one sounds promising
8:16 AM

Anonymous said…
I'm sorry...when did you start wearing a skirt?
I LOVE your tequila opinions, but forgive me if I'm skeptical on this one...maybe a REALLY hot day on the boat when I'm so dehydrated that my tongue is wearing a cashmere sweater (blue...cuz I'm "a winter") and there is no other liquid refreshment in sight, save for the lake water. Wait...is this how YOU came to try it?
11:15 PM

Unknown said…
Well, I review my drinks in context and maybe I should make that clear on the reviews, but if you're the type that drinks a Mike's Hard Lemonade or a flavored malt liquor, then this stuff is the goods. It doesn't have the super sweet taste that I can't stand in a Mike's, allowing me to have plenty of them without feeling like I swallowed a gallon of candy.

Now, if I was going to review this vs. a 21 year old Scotch or a top shelf Anejo, then that's different, so keeping it in context is what I like.
12:20 AM

Anonymous said…
I'm no alcohol expert (in fact, I rarely drink it), but I'm drinking the pomegranate flavor right now and I don't care for it. It is the worst of all the Smirnoff flavors I've tried. Green apple and black cherry were the best.
11:40 PM