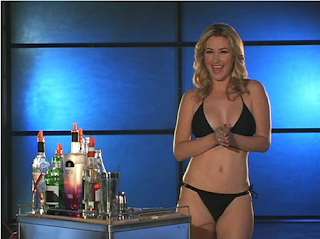 Sometimes things happen on the Internet that create revolutionary paradigms. They transcend the current culture and make giant leaps forward. Yahoo! did it with their search engine, Amazon.com did it with shopping, eBay did it with auctions.

Naked News has been giving us stripping girls telling us the news for years, now Bikini Cocktail teaches you how to make drinks using two pretty hot girls.

The girls seem fun and though the nude version is usually just the bikini version with 30 seconds of them taking their top off tacked on, it's definitely an Internet Only concept which I'm sure is driving traffic in hoards.

Unknown said…
Call me a liquor geek, but here's what I ran into with my Topless Academy bartending video (http://www.toplessacademy.com/) - after a few viewings I wished they would stop focusing on the chicks so much and give me some hot, drink closeup action.

I'm guessing the same thing would happen here but you're stuck with a month subscription instead of just a DVD.
5:17 PM

Heckboy said…
Call me a liquor geek, but here's what I ran into with my Topless Academy bartending video (http://www.toplessacademy.com/) - after a few viewings I wished they would stop focusing on the chicks so much and give me some hot, drink closeup action.

I'm guessing the same thing would happen here but you're stuck with a month subscription instead of just a DVD.
5:19 PM