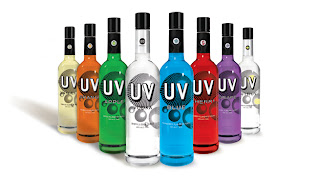 I want you to hit me as hard as you can.
I received UV Vodka in the same box as the Phillips Union Vanilla Whiskey. My experience with that whiskey wasn't the best so I went in to the UV vodka tasting with some trepidation. That was a bad idea.

I am Jack's smirking revenge.
The nine flavors that UV offers are all well and good and anyone can make a decent flavored vodka, but UV's simple bottle belies a much greater truth: A vodka you can sip by itself is very hard to find.

The things you own end up owning you.
I went straight for a vodka martini, up, with a twist. That is to say I just wanted a huge fucking shot of the stuff and pretend I was flavoring it with an imaginary squeeze of a lemon.

I smelled it and found the hint of citrus that was already in there and it didn't make me pull back at all with the smell of the alcohol. It was a nice, rounded, smooth smell and it gave me a pleasure that I usually leave for a good gin.

Go ahead, Cornelius, you can cry.
One sip of the stuff and I was in love. The vodka is incredibly smooth and has a nice, gentle citrus taste that makes it go down easy. If anything, I'd have to warn everyone against the stuff because it doesn't feel like you're drinking a hard, unmixed alcohol and you might not realize you're drinking that much. For a straight, unflavored spirit, that's nothing short of amazing. This is the new vodka that will stay in my freezer in order to make the martini uninitiated fall mercy to my love for the stuff. If you need the flavored ones for something, that's great, but the straight vodka is where it's at.