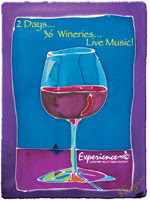 The Livermore Harvest Wine Celebration is in it's 26th year and has enough wineries and food that they could easily go for 5 days, not just the two that I just finished experiencing.

The Livermore Valley is the first place they planted wine grapes in California. It has some of the similar characteristics that make Napa such a prime growing spot (hot days, cool nights) but doesn't have all the pretentiousness that Napa has built upon itself. 36 Wineries is more than enough for just about anyone to have a good time, there definitely was something for everyone and the music and food at each winery varied from Mexican to Italian to Rockabilly to World Music.

Day 1
All of the wineries were grouped together in colors. If you wanted to hit certain wineries you would take the Blue or the Green line and the buses would go in succession to each one on a regular schedule. Some buses were Express so would only take you between the Hub and one of the wineries.

I've been to most of these wineries before so I stayed away from the Blue line which had all of the popular ones like Wente and Concannon and I veered towards the Green line, which had:
I had never been to any of these wineries so it made the most sense to me to take this line. The problems with the buses started quickly though as we got there fairly close to the start of the event but still had to wait 20 minutes for the "Express" bus as multiple Blue Line buses drove by us.

Arriving at Bodegas Aguirre, I immediately was welcomed with the sounds of Rockabilly and the smells of tacos. They were pouring a Rose and a Cabernet and both were decent. The temperatures were climbing towards 100 and the chilled Rose was a welcome sip and it was a pretty good one at that. It's hard to get all the flavors when it's that hot but the crispness of the wine was excellent and one I'd gladly drink again. We also had some Carne Asada tacos that were excellent and quickly made some new friends.

We went through the other vineyards and all of them were a lot of fun. The live music all of the places had was excellent and the food offered looked or smelled very, very good. However, there were only a few standouts in the wines we tasted.

The Wood family put out one of the best Chardonnay's I've had in quite some time in their '05 Para Mas Amigas. The crisp taste and honey notes brought us back to a few years ago when drinking a Chardonnay was actually about drinking a white wine with flavor, something that more and more winemakers seem to be shying away from these days. I had to have a couple more tastes and even go to chat with the winemaker about it for a bit. She created the wine for her girlfriends (who were there pouring) and decided to release it to the general public. Good call.

Most of the other wineries put out wines that were fairly mundane and didn't really drive me to purchase any bottles.

Problems
There were really two problems I saw with Day 1. The first were the buses, there definitely weren't enough and one of the drivers clearly had no idea where he was going as he got lost multiple times or took us to the wrong parts of the wineries. We actually missed one of the wineries (White Crane) because he didn't know his route. Some of the drivers were very nice and knew their stuff, but it wasn't par for the course. Then standing outside for 20-30 minutes while we waited for a bus (sometimes we had to wait for two because they were small and got loaded quickly) really made it so that we couldn't even hang out at the wineries as much as we wanted to because we had to start factoring in travel time.

My recommendation is to follow the smart people who got a limo or driver for their group and went to the wineries on their own. Some even went with a designated driver in their own cars. Relying on the buses is not something I'll do next year.

The other problem were the wines that were poured. It seemed that the wineries put out as part of the sampling 2-3 wines that they had too much of, then charged US$5 for their tasting room wines. The tasting room wines were wines that you could often taste for free if you went out there on any other weekend, so that seemed like kind of a scam to me.

Day 2
After Day 1's heat fest, we decided to go the other direction on the wineries and went the Pink Route. These were wines that were on the Western end of the tour and were close to the Bay itself inside of a canyon that I didn't even know existed between Pleasanton and Castro Valley. The wineries on this route were:
We chose to drive ourselves and just make sure that we moderated our intake with plenty of water and spitting. This turned out to be an incredible idea and going to the out-of-the-way wineries was another great decision.

We started at Chouinard which reminded me of some of the small wineries around Lake Berryessa in Napa. They poured some excellent wines (and a lot of them!), used the festival as a great excuse to offer deals on purchases, and had good food and good music. The poured a very unique Granny Smith Apples wine that completely memorable and would be fun to use for so many things.

We then walked to Westover Winery and were given a tour by Bill Smyth, the owner, and informed about how they handled the wine all the way from the grape to the bottling, on-site. This allowed him to create new kinds of varietals all the time and there was a sampling of over 30 ports. The winery also has a full-service beauty salon on site. The best wine of the day was served here in their 2005 Pleasanton Ridge Cabernet Sauvignon.

The Good
The festival had a bunch of really great, unpretentious attendees that were a big part of making the whole experience fun. It was nice to get to meet the winemakers as well as make plenty of new friends. Going to each of the wineries as they were in festival mode made for a fun experience as well.

The Bad
The fact that most of the wineries seemed to just want to put out whatever wine they had the most of was unfortunate. No one really sold me on any of the wines that they were offering for free. The good wines only came when we paid for the back room tastings.

The Ugly
The bus service needs work. It's basically useless and detracts from the experience. Most people could go to a great couple of wineries but having to deal with the buses made that part more memorable than the wineries themselves. You're taking the buses so you can not worry about being drunk, but things move so slow that there's just no way you can get drunk.

I'll definitely be going next year as it was a really great time. I just need to manage it better so that I can get the most of it.

Anonymous said…
We would be happy to see you again here at Wood Famiy Vineyards next year! We poured 5 wines outside (with no further cost) for your enjoyment this year and none were poured simply for the reason of having the most of. We normally pour our last years vintage outside (until the point of selling out!) and our new releases inside. However, this year we did pour one of our new releases outside, the 2005 Syrah, Madden Ranch (which has already been picked up by Bella Vino (a wine shop in Danville, CA) for their exclusive wine club.
Bene Tebe!
Rhonda Wood
2:21 PM