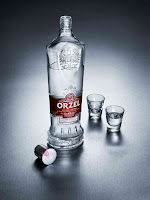 As some companies launch with a brand new vodka, or a re-branded vodka from another country, Orzel launches in to the US using it's own name and history. The formula's been around for about 100 years in a country that vodka was born in and loves it's vodka like few others. The company that makes it accounts for 11 per cent of all the spirits sold in Poland.

The vodka is spelt (wheat) based and is distilled 6 times and then mixed with water from their own reverse-osmosis system. They say that the vodka was originally guarded by secret agents and you had to know the password to get some. I do not know the password so they just sent me their press release.

Look for Orzel right now in Florida and soon in New York, New Jersey, Texas, California, Illinois and Georgia. Expected retail is $34.99 which puts it in a pretty good place for a premium vodka.