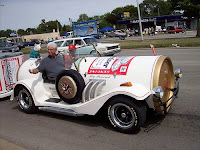 When Hillary was knocking back brews and shots a couple of months ago I don't think she knew that she would inspire the DNC to power all of their vehicles on beer when they held the convention in Denver.

That's what happened though. All of the cars being used to cart DNC folks around in Denver will run on Flex Fuel cars that use waste beer as the fuel.

I thought "waste beer" was just called "urine" but apparently I'm not very "green." I guess I should watch "An Inconvenient Truth."

The beer is donated by Coors Light and is running in GM Flex Fuel cars. MADD was unavailable for comment.

Democratic Convention (cars) to run on beer
via Slashfood