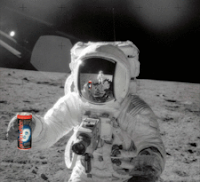 Just in case you were wondering what the Russians were up to in their part of the space station, now we know. They've been growing barley for beer.

Japanese beermaker Sapporo is taking the barley and making beer out of it. You see, beer sales have been rather flat in Japan so they're trying to come up with gimmicks that will help get it some press. However, the beer they make won't be available for sale, thus making the press completely useless to anyone.

They'll have enough barley to make 100 bottles of beer (on the wall) but haven't decided just how they're going to distribute them.