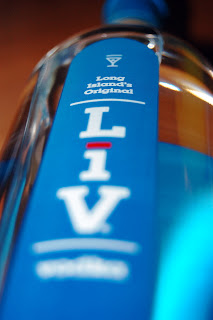 Long Island has been pushing out some wines that people seem to be liking as an attempt to get mindshare away from their 800 calorie Long Island Iced Tea.

LiV Vodka (rhymes with "five") is here to save the day.  Long before vines were planted on Long Island there were potatoes.  These potatoes have finally found purpose in this vodka that uses 9000 pounds of spuds for a single batch, that's 15 pounds per bottle!  It's then mixed with water from a glacial aquifer and put in to bottles that are shipped in pine cases.  Collect them all!

The website seems to spend a huge amount of time telling us just how costly everything they do is but don't let that fool you!  LiV is priced to move at US$38 for a 750ml bottle.

The strange thing is that LiV obviously stands for "Long Island Vodka" but it's called "LiV Vodka."  I don't like repeating myself.