Largest Beer Festival in the US! 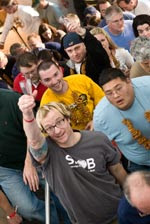 Though you won't be able to show off your beer drinking skills in Das Boot (turn the boot and avoid the bubble!), The Great American Beer Festival takes place over 3 days in Denver and starts on October 9.

400 breweries will be serving up 1800 beers among 46,000 of your closest friends.  You can drink your way across the place but even if you only take a 1 ounce sample from every beer it would be the equivalent of drinking 26 six packs. Now, I'm not saying that it's impossible, I'm just saying that you may want to try to spread it out.

Tickets are close to sold out so you'll be wanting to check Craig's List for additional ones.