- February 18, 2009
Don't be fooled by my tough exterior and manly voice.  Or my well-rounded ass and formed biceps.  Don't even be fooled by my sexy walk that makes grown women feel like schoolgirls.  And don't let it slip by just because of my dazzling intellect or rapier wit.  Let none of these things stop you from believing for a second that I like what are considered "girly" flavors in drinks. 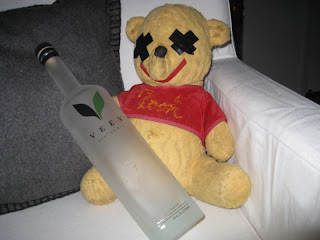 The Setup
I planned on having some friends over and trying Veev with them but, thanks to an unfortunate incident with a goat and several restraining orders, I quickly realized I had no friends.  I now have lots of stuffed animals and none of them were even interested.  All except one, shown here.  The name knitted on his adorable little jacket has been professionally blurred to protect his identity.

The Tasting
Veev Açai is 60 proof which is a bit strong but it's not quite a liqueur either.  Drinkhacker called it a flavored vodka and I think I'm going to go with that.  Considering how much Açai has taken off and the fact that it's being used in almost everything out there (Just take a look at my Açai Flavored Fried Chicken), I was rather impressed with how well Veev came off.

Veev uses the Açai flavor as a bit of a background note rather than shoving it in your face and making you taste it's bitterness, like Vitamin Water does to you.  There seems to be lots of cherry and even hints of pineapple in there.  It's really not something that you drink straight though, which brings us back to being more of a liqueur.

At this point, my drinking partner was several drinks in not caring much if the drink had Veev in it or not.  Or caring if he was standing up.  After some admonishment on my part, we were able to continue with the review.

The thing I really liked about Veev was it's versatility.  I was able to use it to finish a lot of different cocktails, especially ones with Triple Sec, they seemed to compliment each other rather nicely.  Veev was good for adding hints of finish to other cocktails as well as "cutting" it with vodka and making a martini out of it.  The martini made for a gorgeous color in the drink that looked really cool with a cherry garnish.  Simple and tasty.

The Verdict
My drinking partner loved the Veev and it left him with a smile on his face.   I'm a big fan and this will be one of the bottles that I'll be keeping in my bar.  For my manly days.