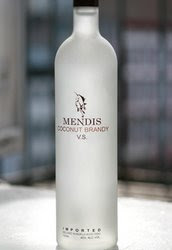 When five stars wasn't enough for some hotels, they invented the six star designation in order to separate themselves from the ghetto five star hotels.  They wanted you to know that not only could you get your shirt laundered overnight but they would also put it on for you and take your place at the boring convention you were in town for.
"Signature Premium" means that the alcohol within the bottle is very high-end but it also has features that allow it to rise above mere "Premium" designation.  In the case of Mendis Coconut Brandy means that the alcohol will have a short run, artistic expression, and signature markings on the bottle.

The bottle not only has the Mendis and Luma names on it but it also comes with a pair of ML cufflinks adorned with Cognac-colored diamonds set in 18 carat white gold.  The cufflinks let the whole world know that you dress like you drink.

You can see a video of the cufflinks, swirling about and hypnotizing you, right here.

Pricing to be announced in the next few days, but really, if you have to ask, you're not going to get it, are you?   Of course, this could all be moot if the actual brandy tastes like cufflinks.