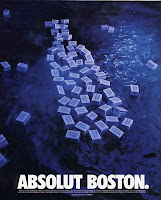 Absolut's been busy over the last month.

The next city flavor up?  Boston!  Of course, it's green tea flavored (because Baked Beans would have been just weird) and it throws in a hint of Elderflower (Yup, just like St. Germain).  I've been drinking a bit of the bottle over the past few weeks and it's absolutely gorgeous, even though the flavors don't seem like they'd fit, it's a nice concoction.  A full review is to come.

Absolut Naked is a bottle without much on it.  It has no label and it's out there as a statement against labels.  The bottle's "stark naked" and it's about going against prejudice and stereotypes.  Look for it in your favorite Duty-Free store.

Finally, there's Absolut Rock.  It's in celebration of Woodstock all-those-years-ago.  You know, the concert with crappy sanitation, STD's, and a bunch of people who wish they could bring it all back again.  Absolut Rock looks more like a bottle doing a bit of S&M but maybe those two things are synonymous?  This one should be widely available starting in late September.